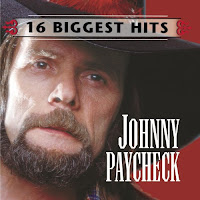 I've recently been reading about country legend Johnny Paycheck. In his time on this earth he'd probably been around the block more times than the rest of us put together. Born Donald Eugene Lytle in 1938 he was known in the 70s for being a big player in country's Outlaw Movement along with Willie Nelson, Waylon Jennings, Merle Haggard et al. As with many of his contemporaries he was plagued with drug, alcohol and legal problems resulting in the ubiquitous spell in clink (he shot a man in Hillsboro, Ohio*) followed by a rapid decline in his health and musical abilities.

Paycheck recorded numerous singles and albums including Don't Monkey With Another Monkey's Monkey, Slide Off Your Satin Sheets, Motel Time Again and even made a cameo appearance on the long running TV show Dukes Of Hazzard. But he'll forever be remembered for his 1977 single, Take This Job And Shove It.

He died after a lengthy illness in 2003 and is a member of The Grand Ole Opry. Here's his self penned epitaph.