They do it in The Congo 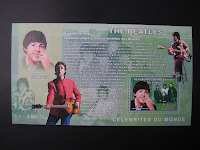 Like a headless ghoul, Paul McCartney roams this blog moaning and wailing and appears when you least expect him. Preparing for next Thursday's move I came across this eye catching stamp from the Republique Democratique Du Congo. It's been in my 'to frame' file for as long as I can remember. It'll have to wait 'til we get to the new place now.

But what do we know about The Congo? Well, there's this for starters:

The DROC is situated in Central Africa. With a population in excess of 70 million it has access to the Atlantic Ocean through a 25 mile stretch of coastline and the five mile wide mouth of the Congo River. Depsite over 200 languages being spoken, French is the official language. As with many African countries, it's had its fair share of wars and upheavals. And when I say war, I mean millions killed between the late '90s and the early part of this century - statistics not seen since WW2.

From 1971 to 1997, it was, of course, known as Zaire. In October 1974 its capital, Kinshasa, played host to one of the greatest sporting clashes of all time: the classic Ali v Foreman fight, aka The Rumble In The Jungle: 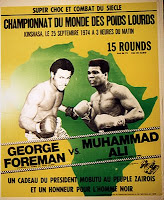 Great fight (Ali won it in the 8th), great record (further proof, if proof were needed, that all great bands have two drummers).