Pauline Boty was a co-founder of the British Pop Art movement in the 1960s and its only recognised female member. A peer of Peter Blake she starred with him in Ken Russell's acclaimed 1962 film Pop Goes the Easel*  highlighting the Pop Art pioneers of the day. Unlike Blake, however, her trajectory was both short-lived and deeply sad. 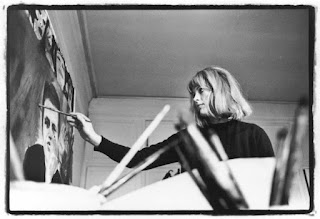 In June 1965 Boty fell pregnant and during a pre-natal exam was diagnosed with a cancerous tumour; she refused an abortion and chemotherapy. She died 1 July 1966 aged just 28. After her passing her work was stored away on her brother's farm where it remained for the best part of 30 years - before it was 'rediscovered' in the 1990s: some of her paintings (tho' not the elusive Scandal '63** - pictured top) formed part of a major exhibition and a solo retrospective. Her rebellious art was a shot in the arm to the prevailing feminist movement and it's nothing short of scandalous that her name is not better known today. 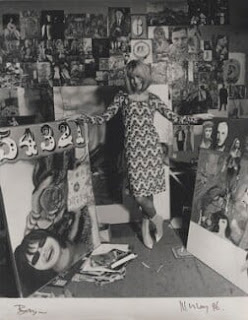