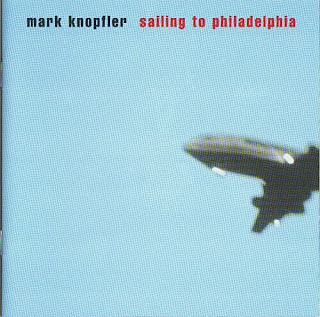 I hope you all had a good Christmas; ours was quiet, but that's how I like it these days. As I type this, Boxing Day's embers are all but ashes in the grate and December 27th (the most unremarkable day betwixt Christmas and New Year) is practically upon us. My festive playlist is, therefore, about to expire and go into hibernation for another year; so goodbye Medieval Baebes, Burl Ives, Dean Martin, Bugge Wesseltoft, Nick Lowe et al and with them all their time sensitive musical offerings. See you next December.

However, one album that inexplicably only comes out at Christmas isn't even a Christmas album at all: Mark Knopfler's Sailing to Philadelphia generally makes its way to Medd Towers around the second week of December and two weeks later, never outstaying its welcome, Knopfler is offering to shake my hand and bid us farewell - with the (guaranteed) promise of 'Doing it all again next year.' A hail fellow well met if ever there was one.

As I say, in its 13 song track list there's neither a sleigh bell or a hoof on the roof in sight. Yet its place at the high table of festive musical accompaniment is assured every year.  No questions asked. And since James left home some 15 years ago he too affords it the exact same level of Christmas importance as tinsel and a tree; one of us generally texts the other around the 12th/13th of the month with the call sign 'It's time' and an image of the album cover.

Every track is a gem. From the barnstorming opening chords of  'What it Is', to the closing bars of its finale 'One More Matinee' the quality never lets up for a second. This one does it for me every time: when Glenn Tilbrook's vocal part comes in at 4:09, I tell you, I'm gone.