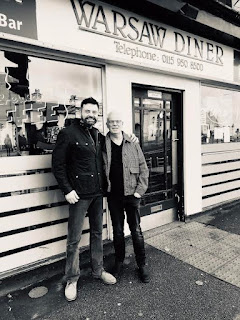 I've never done a school reunion in my life. It's not my thing. What happened in the 70s says in the 70s; or words to that effect. However - thee's always a however - when two school friends find themselves following each other on Twitter and one of them says 'You fancy meeting up sometime?' then that's different. Of course it is. Barry and I go way back. As way back as 1972 if both of our (fading) memories are anything to go by. But we hadn't seen each other since Christmas Eve 1982. And save for a solitary phone call in 1991 when one of us heard the other on national radio, that's pretty much been it communication wise. Until, as I said, Twitter Reunited.
Our first stab at this back in August didn't end well: I'd been on the Birmingham train a mere 15 minutes when a frantic text alerted me to the fact that Barry (or Baz as I - and nobody else - call him) would not be meeting me at New Street after all - he was in Emergency Ward 10 (well, A&E) attending to a real life emergency.
When I got home I posted Baz the gift I'd been planning on giving to him in person. A copy of Stevie Wonder's He's Misstra Know it All c/w with an inscription we both knew by heart; an in-joke that had stood the test of time and, like any in-joke, meaningless to anyone outside our circle. Oh, and I put it in this bag.
A couple of days later I received a beautiful reply. (It began 'Dear Johnny...' - he's the only person I know still calls me Johnny - if it'd been a letter I'd have pressed it and kept it in a secret drawer. That's bromance for ya. 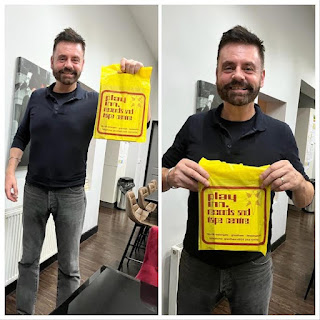 So yesterday the planets aligned and as you can see from the photo at the top (taken yesterday morning), we met up in Nottingham and had a brilliant breakfast and catch-up at the Warsaw Diner - the best breakfast in Nottingham. Don't just take my word - Baz is something of a  hospitality guru and he gave it  a double thumbs up. High praise indeed.
So how did we compress 40 years into three hours? Quite easily, actually. What did we talk about? Everything. Did we laugh? Of course. Did we promise to do it again in another 40 years? Definitely. (But ahead of what would be, let's face it, a miraculous 2062 event, we're already lining up a couple of gigs for a future hook up a wee bit bit before that. Cheers, Baz!
...
Baz told me about John 'Hair on Fire' Wilson who sadly passed recently (the first of our Class of '77 to go). Rest easy, John.
Posted by John Medd on Sunday, October 23, 2022
Labels: Barry Sherwin, Grantham, Nottingham, Warsaw Diner