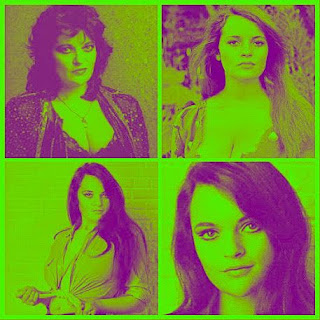 Some of my earliest memories of David Bowie songs are versions by other people. He would often give them away to friends like Mott the Hoople ('All the Young Dudes') and Peter Noone ('Oh! You Pretty Thing'); I've always preferred Simon Turner's interpretation of 'The Prettist Star' over the original. Still not sure about Lulu tho'.
Bowie was a huge fan of Andy Warhol but had never met the daddy of Pop Art when he penned his three minute homage to him. When he finally did play it to him he hated it. I love it. I also love his former girlfriend's versh too. And she got Mick Ronson to play guitar on it. Born Richenda Antoinette de Winterstein Gillespie she'd known the artist formerly known as David Jones since they were teenagers. Probably explains why she handles the song with such care.
Dana Gillespie - Andy Warhol (1973)
Posted by John Medd on Thursday, October 20, 2022
Labels: 1973, Andy Warhol, Dana Gillespie, david bowie, Simon Turner