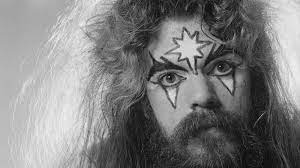 In the same way that Noddy and Slade stamped their trademark on the 70s (not to mention Christmas) so too did Roy Wood: forming the Electric Light Orchestra with his mate Jeff Lynne after the demise of the Move, before throwing his lot in with Wizzard, whilst throughout glam (and beyond) keeping one hand on a none too shabby solo career (a bottom drawer permanently stuffed with songs he couldn't find a home for in any of his bands), Wood, in a lot of ways, probably out-Slayed Slade; whereas Noddy shared songwriting duties with bass player Jim Lea and didn't have to worry about going it alone, Roy was writing all the hits for both himself and the band singlehanded. And he applied his own make-up!

His first solo album, Boulders, released in 1973 comprised songs he'd squirrelled away since the late 60s. It's a beautiful collection and a solo effort in every sense: written by, produced & played by (all instruments with the exception of the harmonium) and he also painted his self portrait on the sleeve. The record is crammed with hits that never were* including one track he'd written for the New Seekers and their stab at Eurovision: Songs of Praise, which made it to the last six of the heats was outvoted in 1972 by Beg, Steal or Borrow. But just take a look at some of the other songwriters on display here - Mike Leander - who co-wrote all Gary Glitter's top 10 hits, Mike Sammes (without his Singers) & Ray Davies - he of the Button Down Brass (not the Kink) to name but three. 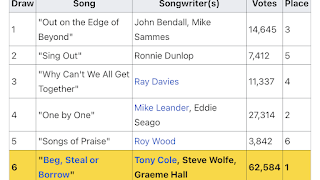 * When I said 'hits that never were', I meant with the exception of this gem. I loved it then and I love it still...