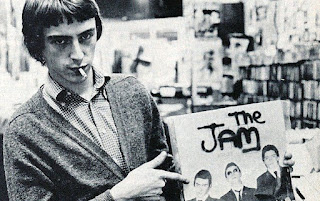 Paul John Weller clocked up his 64th birthday last week. I wonder if he rented a cottage in the Isle of Wight - if it wasn't too dear, that is? I distinctively remember coming out of my local record shop in 1977 gleefully clutching my copy of the Jam's debut album In the City thinking that whilst Weller was hellava lot older than me I could relate to what he and his bandmates were railing against. Turns out Paul only had the jump on me by a couple of years (tho' back then that seemed like a massive gulf) and, despite being an angry young man, his first collection of two and a half minute punk workouts amounted to nothing more than being slightly miffed about living in Woking and not London. (A mere 31.2 miles from his front door to Wardour Street according to the RAC Route Planner.) He should have tried living a hundred miles up the A1 in Grantham; he really would have had something to be angry about then.

I've written before about Weller and his prickliness. Unless you're part of his inner circle he holds everyone at arms length. I can remember many moons ago interviewing his guitarist Steve Craddock about his gaffer's moodiness and you could almost see the wagons being circled. "He's a really funny guy" said Craddock. OK, whatever you say.

I wonder what Weller would make of today's selection? If he'd heard it in 1977 I'm sure he'd have hit the fucking roof; maybe not so today, who knows?

The thought of Weller mellowing is something I still can't grasp. I know he's not one, as a rule, to sit down on a stool with just a microphone and his acoustic guitar and bare his soul (with the odd exception), so the idea of him doing precisely that and revisiting and reinterpreting his earlier work would be an anathema. But I'd pay good money to hear him do something like this...