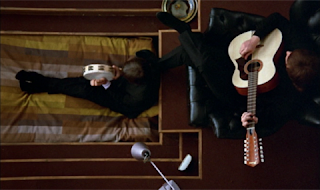 You wait ten years for a post about flutes...

In the world of Fifth Beatles - I imagine it to be like a low rent Stella Street where Pete Best and Brian Epstein run the corner shop and Billy Preston mans the laundromat - its inhabitants are all tenuously linked (some more than others) to the four lads from Liverpool who shook the world. And the Fifth Beatle (of which there are more than you care to think), by inference, each played his or her (small) part in the shaking.
Anyway, about those flutes. Ever wondered who played the beautiful flute solo on John Lennon's You've Got to Hide Your Love Away? As pub quiz questions go it is quite niche, but the answer is Johnny Scott. Whilst this may not qualify him fully for Fifth Beatle status - maybe Sixth? - I bet it's a story that's enchanted the grandchildren over the intervening years.


Scott was - and indeed still is - a respected jazz musician, arranger and composer of many film scores. In the mid 1960s he found himself working with many acts on the EMI roster at Abbey Road and did a lot of work with George Martin (another early occupant of Fifth Avenue) - which is how he got sucked into the Beatles orbit.

At the behest of Martin he laid down a tenor flute in the spaces in Lennon's vocal track and an additional alto part played an octave higher. Hearing cover versions without the flute just don't sound right to me.

Before I go, I just want to leave you with one of my all time favourite Beatles quotes. And, before you ask, it's not delivered by a Beatle. It's actually a Dandy Nichols line quite early on in the Help movie: waving to the Fab Four as they get out of their chauffeured limo and walk to their respective front doors, Nichols says to her friend about how fame hasn't changed them: "And still the same as they was before they was."