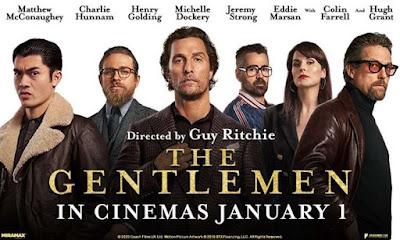 Not since the days of Barry Norman have I paid a great deal of attention to film critics; oh, don't get me wrong, many of them can (and do) steer us away from turkeys, but, at the end of the day, a movie is only ever as good as *you* think it is. Nobody else's opinion counts. Nobody's. Far too many scribes walk into movie theatres with so much baggage you'll often be wading through their 2,000 word review and not start reading about the actual film till you're two thirds of the way into it.

I went to see The Gentlemen on Saturday. For those of you who don't know The Gentlemen, it's a modern day British gangster movie, and it's written & directed by Guy Ritchie. So, contained in that last sentence alone is enough information to alienate at least 50% of broadcasters, journos, hacks and bloggers who will probably dismiss this frenetic 113 minute caper with not so much as a backward glance. Critics, eh?

For what it's worth, I absolutely adored it. The script was fizzing, the storyline both clever and compelling, and the casting of Hugh Grant as a grubby tabloid reporter was a masterstroke. Consign to the rubbish bin all your bungling Grant preconceptions and be in no doubt - he steals the film; right from under the nose of its star Matthew McConaughey.

Let's wrap this up then - the language is eye watering, the gags are punchy and the pace is nothing short of high speed. And it's very funny. What more do you need? It's a masterpiece. ***** (Put that on the side of a bus.)