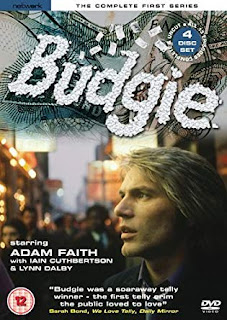 I'd like to think that the opening words of my first blog of a new year set the tone for the remaining 360 odd days to come. But as last year ended on an all time low (for all sorts of reasons - some obvious, some not so), the bar is currently set pretty low. However, as this blog approaches its 10th anniversary I'm afraid I can't make any promises for 2020. To quote Doris Day, what will be, will be. A Happy New Year to you all.

I spent much of the holidays re-watching Budgie - Keith Waterhouse's finest creation (surpassing even the brilliance of Billy Liar). I've name-checked Waterhouse and Budgie Bird in previous blogs so I'll concentrate, instead, on the theme music.

Only two series were made by LWT - in 1971 & 1972. The first deployed a haunting instrumental, The Loner, credited to the Milton Hunter Orchestra. Budgie, played by Adam Faith, is seen chasing (always out of reach) pound notes - the programmes's overriding premise encapsulated in just 45 seconds.

For the second series we see the same footage, only this time to the backdrop of a beautiful song written by Ray Davies: Nobody's Fool is - to the untrained ear, the Kinks at the top of their game. Only it isn't. Well, it's Ray Davies singing, that much we do know, but according to the label on the accompanying Pye single, the artist is Cold Turkey. Go figure.