She gives me everything, and tenderly 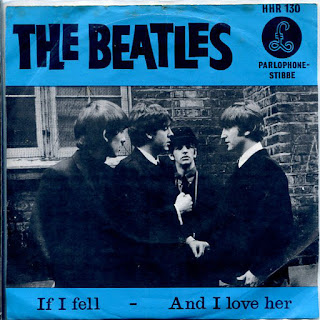 Liverpool tomorrow. I'm training it - using split tickets for the first time - ETA into Lime Street around lunchtime. Ray's flying in from Belfast, due to land around the same time, so it'll be a spot of bush tucker in the Philharmonic, and then we'll see where the fancy takes us.

We're not expecting to see Macca during our two day stopover, though if he did care to join us I'm sure he'd be good company. There are many questions I'd love to put to him, not least: 'Why, at the age of 76, are you still getting bent out of shape about songs being credited to Lennon & McCartney and not McCartney & Lennon or, in the case of 'Yesterday', McCartney & Lennon can whistle? Life's too short Paulie, get over yourself.

If I've got this right, these two Hard Day's Night period classics - which, as you can see (above) were paired as an 'A' & 'B' side for their American release - were written by the pair thus:


And I Love Her (1964)- McCartney, with Lennon writing the middle eight*