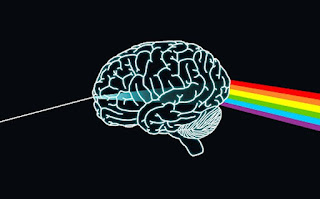 Two songs below that share the same title. Both make me happy. One deliriously so. I'll let you guess which. And it's all in the brain. Music lights up our limbic system and quite literally turns us on. It's official. But I'm just a mere layman, I won't insult your intelligence with my mumbo jumbo - read all about it from people who know their shit. Ok this might not be Stephen Fry, probably more Brian Cox, but you get the drift. Now, those two songs: