Blue Eyed Soul was a lazy catch all phrase that some music hack coined back in the sixties to describe anyone with white skin having the audacity to sing rhythm and blues or soul music.
And everyone from Rod Stewart to Adele, via Paul Young and Mick Hucknall, has subsequently been burdened with the tag. It should be redundant now, but you will still see a rake of compilation albums bearing the name, and flyers too for various club nights; as the duty roster included the likes of George Michael and Spandau Ballet, you'd know to leave your parka on the coat hook and your scooter in the garage. Northern Soul it is not. 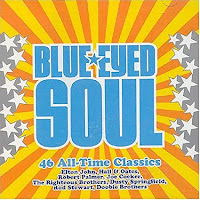 One of the names (well, two to be precise) constantly mentioned when Blue Eyed Soul gets a name-check is Hall & Oates. Their take on all things soulful was never anything less than luxurious. It all sounded so effortless. And frighteningly good, too: Kiss on My List was just about as good as it got.

Here's a version Daryl Hall did as part of his Daryl's House series - a couple of octaves lower and a tad slower, I think it shades the original.