I treated myself on Tuesday. I let the train take the strain (1st. Class, obvs) and met my good friend Mondo. Bethnal Green at one o'clock we said; perfect for a spot of lunch at Pellicci's followed by a stroll down to Brick Lane.
I've said it before, but it's worth saying again anyway, without Mondo this blog would not have got off the ground; in 2008/2009 (when I first heard Mondo & Piley's Podrophenia podcast), after just a couple of emails I knew I was gonna get on with this fella. His passion for all things rock, and indeed roll, coupled with his guidance and encouragement helped me get this stuff out of my head and into the world we now call social media.

I went for the mixed grill and Mondo went for the chicken. Johnny Depp and Michael Gambon were no shows, but Dave Gorman was sitting next to us; not sure if he's already on their wall of fame.

To the Truman Gallery to see another mover and shaker, but not till we've shaken hands with half the East End - Mondo's treated like royalty in these parts. I just basked in his reflected glory.

After conducting a four year Twitter relationship with Morgan Howell it was good to finally meet him on Monday. He was sharing the gallery with Chris Barton & Horace Panter, and together they were showing Cassette versus Vinyl; Morgan's Super Size record sleeves vied for wall space with mutant cassettes and gigantic 'button' badges.
I'd only ever seen his masterpieces on line and in Sunday supplements, so seeing them up close and personal was very special, to say the least. Morgan was very generous with his time and was great company. We talked about everything under the sun, including how to get rid of uninvited pigeons who fly into prestigious galleries.

Chris Barton was a nice fella too. He took the time to explain how he made the giant musicassettes and boxes. I wish the Number One Son had been with me at this point as laser cutters were thrown into the mix and I know James would have been all over him like a cheap suit.

From the Truman Mondo then gave me a guided tour of Spitalfields pulling in a fair few hostelries. It transpires Mondo's old man was a contemporary of Ronnie and Reggie. He glossed over the finer details but, like Morgan, he painted a picture of a world that just doesn't exist anymore.
Glasses were charged and recharged, photos were taken of Spoons carpets and we swapped more rock and roll stories than you could shake a shitty stick at.
Around nine bells it was time to depart; to Liverpool St. - homeward bound. Until the next time. 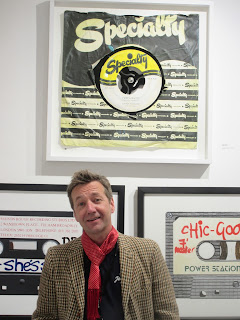