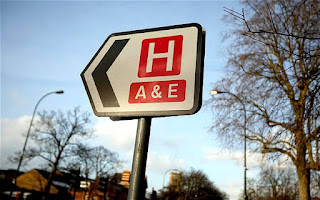 The ability to put one foot in front of the other is a skill, seemingly, some of my friends are fast losing (not that I can talk). I heard today that Vaughan suffered the ignominy of tripping over a discarded water bottle and, before you could say Evian, was being admitted to Lincoln County Hospital with mild concussion. He was discharged when he was able to count backwards from ten and promised doctors he'd look where he was going next time. Man up Vaughan.

This follows a very nasty fall my friend Adele had last week. Drink may have been taken and, yes, 'Liverpool Sandals' may or may not have played their part too, but Adele was also was rushed into hospital after she went arse over apex and smashed her face into the pavement. Ouch. Get well soon Adele x.


Neil Finn - Fall at Your Feet