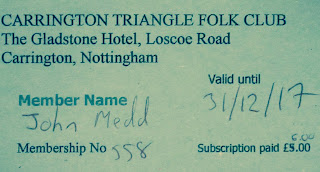 I've joined a club. They wanted me to join a little while ago, but I hesitated; you see I'm wary of clubs. Don't get me wrong, it's not that I'm not a joiner-inner (if that makes sense?). But, if you're not careful, clubs get taken over by odious little men. Odious little men with chips on their shoulders who turn nice little gatherings into cliques. To say they usually sport beards wouldn't be fair; but it's a truism. And they usually have a northern connection - Leeds, often.

But I digress. the good folk at Carrington Triangle don't do cliquey. They couldn't be any more inclusive if they tried. Just ask the 557 members who signed on the dotted before me. In fact, why don't you have a word with Paul Carbuncle  - Paul straddles that line between folk & punk, snarling & sincere, Carrington & Dublin. Like the rest of us, he sings for his supper - a veggie curry during the half time interval when glasses are re-filled and parish notices are read out.

Looking at the who's who in their illustrious guest book reveals a plethora of superb artists who have trod the boards at the Gladstone Hotel - home to the Triangle. I'd be very surprised if Chris Sherburn and Denny Bartley hadn't played there at least once. If they haven't, I may have to put a polite request in to see if we can secure their services in the not too distant. Here they both are together with Emily Sanders - a natural trio, if not a triangle.