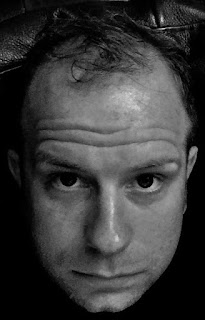 Along with the Number One Son, my friend and fellow Beatles nut Chris Higgins (Chiggins) has been sending me end of year CD compilations for as long as I can remember. He'll invariably chuck in a couple of self penned tunes in there by his band The Ruminators. And most years it's a blind tasting with no track listing. Tricky. This year's opening salvo was a belting tune I could have sworn was one of his. Turns out it was by The Eagles of Death Metal. D'oh! Anyway, he thanked me for the compliment. He also agreed to subject himself to a long overdue interrogation.

So, Chris, what music was being played in your house as you were growing up?

What was the first record you bought with your own money?

Duran Duran – Seven and The Ragged Tiger (cassette). First 7" was You Take Me Up by the Thompson Twins.

And the last album you bought?

Gregory Alan Isokov – The Weatherman (A slightly disappointing follow up to This Empty Northern Hemisphere - which is pure genius).  I’ve since joined the Spotify Gang.

I bought a guitar quite late (I was about fifteen) with the sole intention of writing songs.  Having taught myself badly, I was writing songs properly a couple of years later.  I think things can sometimes sound better when you're playing to the edge of a fairly limited ability.

I think the melody is the most important for sure.  Without a good melody you haven’t got a song – just ‘written word’ on a bad piece of music - I subscribe to all that is the Beatles - if the words are good – you’ve probably got a very strong song. If the words are poor, you still might havet something worth a listen.

Are you writing stuff all the time, or do they take a while to gestate?

I’m constantly writing songs in the melody/chords/structure sense. As I get older, lyrics take more and more time which really delays the finishing off/recording part.  Typically I have up to ten songs hanging around waiting to be recorded at any given time; if after a few months they haven’t become the priority to record I tend to discard them forevermore - never to be completed.

You’ve got the opportunity to donate one of your songs to Macca. Which one do you give him?

As big a Beatles fan as I am, my songs don’t sound very McCartney-esque (unfortunately) - but there is one called It's About Time which he might like? (It's sort of in his ballad territory.)

You’ve got the use of a time machine for the night: where (and when) are you going?

Sell Brighton to me in a sentence.

Brighton is open minded, traditional, cosmopolitan & British where anything can happen, and a place very few seem to leave once a few roots sprout.

You don’t fancy living in Nashville?

No! I had a demo rejected (Pretty Baby) by a publishing company in Nashville for sounding too traditional/old school. In the meantime, most modern country sounds to me like a hiding place for bad 80’s rock.

Beatles or the Stones?

Do you share your bag of sweets on long train journeys?

For me a train journey is time to slope off into your own world – so no, sorry!

A big thank you to Chris for taking the time, and here's a link to more of his fabulous songs.

Chris' partner in crime and fellow Ruminator, Ali Gavan, records all their stuff in his own rather FAB studios in Brighton.
Posted by John Medd on Friday, January 13, 2017
Labels: Ali Gavan, Brighton, Chris Higgins, Macca, Q&A, The Beatles, The Ruminators, Transmission Studios