Matt Beer is a fellow member of York Songwriters: we're a bunch of ragtag singers and musicians who meet up every month in The Black Swan in York. We each play a new song and talk about it - whilst we drink beer; I fear I may be better at drinking beer than writing songs. Matt, on the other hand, is a fabulous songwriter and has just released his new album 'Coming in to Land'.

What sort of music was playing in your house when you were growing up?

Mostly classical I think - my mother liked Mozart a lot - but when I got older my brother got me into Dylan, Van Morrison, Bowie and Roxy Music and I found people like the Velvet Underground, Talking Heads, Elvis Costello and Ian Dury myself in the late 70s.

For anyone not familiar with your material, describe the kind of songs you write.

I write lyrics first, so that shows a little what my approach is. I like people like Randy Newman and Paul Simon where the lyric is almost the hook in the song - wordy songs like 'You Can Call Me Al' seem so much richer to me than the usual stuff. Although I love pop music and there's nothing wrong with a boy meets girl lyric - I just can't do it myself. I do try to be accessible - even in the early 80s when I was playing in a band and we were all long overcoats, floppy hair and general doominess I wanted to write cheery tunes.

'Coming in to Land' sounds like a family affair. Your kids have obviously been influenced by their dad - do you road test new material in front of them first? 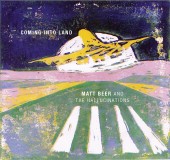 I have all three of my children on it and my wife Mel plays sax on one of the tracks. I went into the studio intending to play all of the instruments, but I wanted real drums and I'm a lousy drummer.  My eldest Tom on the other hand is a great drummer, event though he taught himself and he's the guitar player and singer in his band Bull. Tom also plays trombone on a couple of tracks and Holly my daughter and Paddy my youngest son do backing vocals - Paddy's voice hadn't broken at the time but it has now so it's a historical record. I didn't actually encourage them to write songs and be in bands when they were growing up - I spent a lot of my 20s doing it and as a career choice it's a rotten idea, but everyone taught themselves and did it anyway! Which doesn't mean to say that I'm not very proud of them. I very occasionally play songs to them but not really - I think I played Tom a couple of them, but with all of my kids writing songs it would be horribly competitive if everyone was saying 'listen to me! I've got a new one!' Also when I was in my 20s I used to play songs to anyone and everyone and I got to dread that glazed look people got, so I got out of the habit of playing them to anyone for quite a long time.

Do you have a favourite songwriter, someone whose work inspires you? Is there one song out there you wished you had written?

It's hard to pick one person and at different times of my life different people have inspired me. Right now there's a bloke called Dan Willson who has a band called Withered Hand who is brilliant and I like Steven Adams who was in the Broken Family Band a lot too. Over my life it would have to be Dylan and Lou Reed, Tom Waits, Warren Zevon - there's so many really. I was just listening to random stuff in the car and 'Something Changed' by Pulp came on - I'd have loved to have written that. What a star Jarvis Cocker is!

Can you see other people singing your songs?

No I don't think so - I'd be delighted if they did though.

What advice would you give to aspiring songwriters?

I think you have to write for yourself - if you like it, that's good enough. If someone else likes it even better. I should share my pet theory that the humble song is the greatest art form of all time. Cinema, photography, painting - they all have a claim to the odd century maybe, but songs have said more to more people than anything and they always will. From Robert Burns to Smokey Robinson a melody will always delight and a lyric will always connect. It's just a matter of how much. I'm not sure where death metal fits into that but I'm sure it does somewhere...

How do you consume music these days? Old school vinyl, CDs, iPod, Spotify?

Like lots of people I've started listening to vinyl again - with the emphasis on listening. I'm not much on hi-fi, but it's much more of a complete experience to hear a piece of music from start to finish the way it was recorded. I would miss my old MP3 player on public transport though - for years I thought you should be engaging with the world and disapproved of shutting yourself off (this is back in the days of tape and Walkmans) but as I got older it seemed a good idea to withdraw from certain environments, like crowded trains! We all probably do it too much though.

Who was the last band or artist you paid to go and see?

Other than family, the wonderful Rozi Plain at The Crescent in York.

Do you share your bag of sweets on long train journeys?

Well I just got diagnosed with type 2 diabetes so my sweet eating days are behind me. I don't think I did when I ate sweets though - too much of a sweet tooth!

Definitely converses - I've been wearing them all of my life and my feet rebel against anything else. It's a bit embarrassing I suppose, to be in your 50s wearing baseball boots, but not embarrassing enough not to.

Neither really - I've never watched soaps and I really can't be bothered with all of those endless American TV series that are eight seasons long. The amount of people who've said to me 'oh it gets good half way through season 3' or whatever - that's a hell of an investment of time! Virtually everything I watch and enjoy seems to be on BBC Four nowadays - which is probably the most middle class/middle aged thing anyone has ever said!