Smoke on your breath 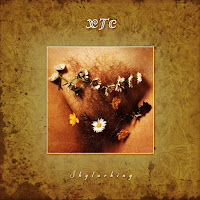 They call it the irresistible force paradox: when an unstoppable force meets an immovable object.
In 1986, when XTC had a clutch of songs they were desperate to turn into their next album, the band were told by their record company, Virgin, that rock and roll veteran Todd Rundgren would be at the helm.
With his producing hat well and truly on, Rundgren listened to all their demos, and without discussing it with anyone in the band, chucked all the songs he didn't like in the bin and got them to record the rest in the exact sequence and running order he had already preordained for the album; Andy Partridge - Managing Director of XTC plc - wasn't happy.

The band based themselves at Rundgren's remote studios in upstate New York where Partridge and Rundgren were at each other's throats the whole time. 'It was like having two Hitlers in the same bunker' Partridge said many years later when looking back at the making of the record. Perversely, that's probably what made Skylarking one of XTC's finest hours and a truly gorgeous collection of songs.