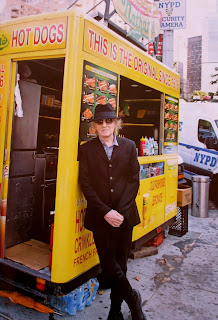 Ten things you need to know about Ian Hunter:

* He sings in a fake Cockney accent - hailing, as he does, from Herefordshire. That's nearly in Wales.

* His sunglasses are fixed to his head with No More Nails.

* Hunter is actually his middle name. I think it's got something to do with tax.

* He invented the Sex Pistols. Seriously. Listen to this if you don't believe me.

* I saw him play The Running Horse in Nottingham the day after Diana died, and he insisted on a minute's silence before the gig started.

*   'Ships', the song he wrote about his father, was recorded by Barry Manilow. I know, hard to get your head around, isn't it?

* Hunter has just released an eye watering 30 CD anthology. It's called 'Stranded in Reality'. You really should go out and buy a copy. Apart from 'Once Bitten, Twice Shy' and a booklet containing 841 photographs of him in his sunglasses (most of them taken indoors and/or at night), you'll find this favourite of mine:


Ian Hunter : Death of a Nation