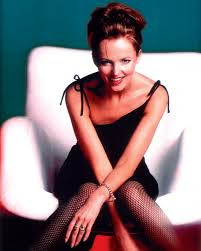 Everybody fell in love with Clare Grogan in the eighties. And I was no exception. How could you not? She was a film star (Gregory's Girl), a pop star (Altered Images), even a TV star (who can forget Kochanski in Red Dwarf? She and Lister were like Bacall and Bogart in space. Sort of). In short, she was gorgeous.

When you count how many records she sold with Altered Images you soon run out of zeros on your calculator. And yet, when you ask her how much money she saw from her none too shabby pop career, it's a sum not far off the square root of fuck all. Now that the dust has finally settled on that part of her life (it took some of the best legal brains in the land nigh on twenty years to divvy up the spoils) Grogan netted a grand sum of two bob and a conker. And she's not bothered.

I'd love to say she told me this over a cup of coffee in her local Starbucks in Crouch End but, alas, it was just one of the nuggets that came out of her splendid interview with Mark Ellen and David Hepworth on the latest Word in Your Ear podcast. That and opening for Siouxsie & The Banshees on their 1980 tour at the tender age of seventeen.

And when she spoke so movingly and so passionately about her young daughter and the whole adoption process, I fell in love with her all over again.