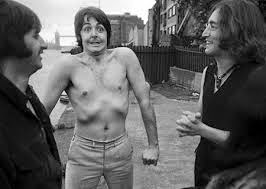 Quite how many Os should appear in the spelling of today's post is really up to Paul McCartney. Or, indeed, Stevie Riks - the one man Beatles*.

'Paul McCartney makes a cup of tea' has been staple viewing at Medd Towers since I first stumbled upon it on Youtube (where else?).


Riks has, without doubt, studied Macca, complete with all his facial tics and mannerisms, in the same way David Attenborough might study a rare species of insect in the Serengeti. As for the 'Doooo', it obviously has its roots in Get Back: fast forward the link to 2:32 and there it is. Moving on a handful of years and here it is again in its first non Beatles setting: 'Wings - the band the Beatles could have been' - as Alan Partridge once said. Its first spotting is at 1:19.

And then as a more recent example we see it rediscovered in a solo performance. Dance Tonight, his Radio 2 friendly mandolin waltz, has a rather special Doooooo clocking in at 2:08. Also, look out for Mackenzie Crook doing his best Postman Pat impression.


* I'd love Stevie to do a one man read through of my Beatles two hander I wrote a while back.