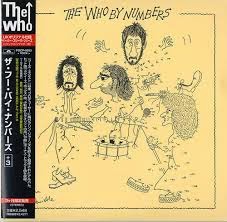 The Who were once the loudest band in the world. It's official - check out The Guinness Book of World Records if you don't believe me. And, for what it's worth, I was there the night they turned the amps up to eleven.

Pete Townshend is paying for it now though. These days his hearing loss is so bad that Roger Daltrey can call him all the names under the sun and he can't a hear a bloody word. Here's some recent footage of him playing a delightful song from The Who By Numbers album. He'd written Blue Red and Grey with suicide uppermost in his mind and definitely didn't want the song put on the band's latest platter. Their producer, Glyn Johns, was having none of it and, with just a little bit of muted trumpet from John Entwistle as a backdrop for Townshend's ukelele and fragile vocal, it became the album's diamond in the rough.

Posted by John Medd on Monday, November 03, 2014
Labels: Blue Red and Grey, Pete Townshend, The Who