A candle loses nothing by lighting another candle 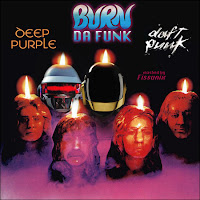 The Mark 3 lineup of Deep Purple may not have been the most commercially successful of their reincarnations, but it was certainly their funkiest - by a country mile. Mid-seventies albums like Burn, Stormbringer and Come Taste the Band saw the group drop their extended guitar solos and take a more introspective look at themselves. In fact it was why Ritchie Blackmore (surely one of the most miserable guitar players ever to have picked up the instrument) left the band. 'I don't play shoeshine music' he told Sounds back in 1974.

How apposite then that this cheeky little mash up finds the Purps sharing a bed with Daft Punk, the behelmeted French funky house duo. I'm guessing vocalist David Coverdale thinks it's a hoot; Blackmore on the other hand probably tried to slap an injunction on it. And, anyway, I think you'll find he nicked the riff for Burn from George Gershwin's Fascinating Rhythm.