As I alluded to a couple of weeks ago my cousin Raymond and I have been planning an elaborate family reunion in Northern Ireland where nobody, not even me, knew the full ensemble; you see Ray had invited a 'mystery guest'. Ray doesn't do smug, but this came close. More on that later.

I love reunions, especially when there isn't a wooden box in the corner of the room. I won't bore you with details of people you don't know or talk you through every permutation of photograph that was taken (aunties, uncles, cousins, nieces, nephews, first cousins three times removed), suffice it to say that Friday night was perfect. Before proceedings got under way proper I met my cousin Adrianne who I'd not clapped eyes on since the scorching summer of 1976. She hadn't changed a bit. I, on the other hand, looked old enough to be her father - and I'm a year younger.

Adrianne and I lay in wait in an adjoining room with the party now getting into full swing. I put a phone call in to Ray's father, my Uncle Aidan, from, he thought, across the Irish Sea: struggling to make himself heard above the hubbub I calmly walked into the party, still talking to him on the phone and straight into his line of vision: Bombshell # 1. After we restarted his heart I casually asked how Adrianne was these days. Her cue to walk through the door: Bombshell # 2. Whilst the Paramedics were working flat out reviving everyone the door bell rang. Auntie Stella. The 'mystery guest': Bombshell # 3. Carnage.

Saturday morning started as every Saturday should with enough bacon and sausages to feed an army washed down by gallons of tea. Ray was holding court in the kitchen basking in the success of the night before knowing that 2013's Party Planner of the Year award would be coming his way.

We left the oldies back at base, many still strapped to ECG machines, whilst us young 'uns ventured forth into Belfast for a few pints of Guinness in The Crown Liquor Saloon. On the train I told Ray I needed to drop into the Europa Hotel. I said I was writing a piece about Europe's most bombed hotel and that the manager had got some old photographs for me to use. He bought it.

Unknown to him, and the rest of them, I'd arranged for the Number One Son and his fair maiden to come over from Manchester and join us on the Saturday. And, after a quick call to the Europa, what better way to 'introduce' him, he being a musician, than for him to swap places with the resident pianist in the Piano Lounge and be playing when we all walked in; it went like clockwork. Ray was in bits: Bombshell # 4. Wipe out.

Thinking of organising a party? My rates are very reasonable. 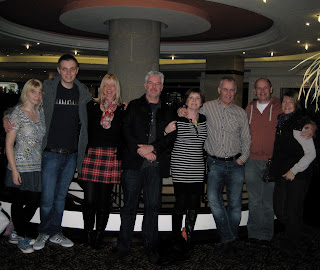