Mark Lewisohn, possibly the real Fifth Beatle, is currently having vast quantities of smoke blown up his jacksie for his new epic Beatles tome Tune In; I’ve been following David Hepworth’s attempt to climb the North Face of same and it really is, or so it would appear, the last word on the group’s early years. Forget 1962-1966. And as for 1967-1970, you can only see that far ahead with the aid of the Hubble telescope. No, for this scene setter Lewisohn is concentrating purely on 1942-1962. That’s right; there was still a war on. 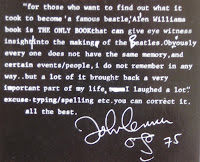 I shall, of course, read it myself in the fullness of time; my interest in all things Beatles goes way beyond passing. Until now my main reference point for this period of the group’s life has been Allan Williams’ The Man Who Gave The Beatles Away. Co-written I know, but Williams (their first manager) was there. Many of Lewisohn's references are culled from this book which was written in 1975; only five years after The End. Take the story of a young Richard Starkey writing to the Houston Chamber of Commerce in 1961 looking for work. Williams lobs that in to the mix on page 209, Lewisohn doesn't reach October '61 until page 493. And, still being alive, Lennon (allegedly) read Williams' account and even endorsed it. I wonder if Macca will be as generous with Tune In?
Posted by John Medd on Thursday, September 26, 2013
Labels: Allan Williams, David Hepworth, Fifth Beatle, John Lennon, Macca, Mark Lewisohn, Richard Starkey, The Beatles, The Man Who Gave The Beatles Away, Tune In, William Marshall