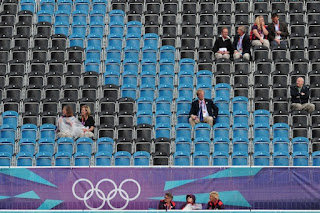 This is not a tirade against The Olympics, it's not even me having a pop at everyone in the country pretending to like rowing, cycling and equestrian events*. It's not even me getting upset that swimming pools are now called Aquatic Centres.

I really wish I could raise enough strength to rail against the BBC for having every single TV channel, radio station and website tuned to '2012'. Propaganda doesn't even come close. And, please, don't get me started on what you can and can't take into the stadiums (stadia?), breathtaking opening ceremonies, ticket prices, empty seats, Seb Coe, badminton cheats, Olympic legacies, doping, medal tables, the greatest Olympian of all time, yadah, yadah, yadah.

The rest of the population can sit in front of their 52" surround sound entertainment centres and bite their nails to the quick while one man runs a little bit faster than the next or jumps a tad higher than him. I, meanwhile, will be seeking solace in any pub, cafe or drop-in centre that does not have a television. On the other hand, I'll probably just stay at home and thank the Lord that it will all be over in about the same time it takes some drug fuelled flossy to swim two lengths of the baths.

* We do appear to be good at sports that involve sitting down, don't we?
Posted by John Medd on Wednesday, August 01, 2012
Labels: Shooting fish in a barrel