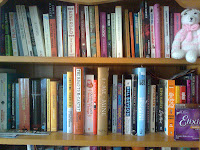 Six months ago I set up a Book Club. We're known as The Sun Readers; meeting monthly in The Sun Inn, what else could we have called ourselves? We're a merry band of readers who between us have an eclectic taste in all things literary. Everyone gets to have a say (we never stand on ceremony) and it's always fun to pull the pin on an idea, lob it into the group and watch the sparks fly. Does the beer stimulate the conversation? Maybe. Do we take ourselves too seriously? Definitely not. Are we brutally honest about our reading experience(s)? Always.

So who have we read? Magnus Mills, Edward Rutherfurd, Julian Barnes, A D Wilson, Henning Mankell and George Orwell thus far. After a rigorous discussion we always close the evening with the scores on the doors - Barnes' Sense Of An Ending is shading it at the moment closely followed by Wilson's Snowdrops and The Scheme For Full Employment by Magnus Mills. Paramedics had to be called to The Sun Inn last week, such was the ferocity of the kicking Henning Mankell received for his non-Wallander dirge - Kennedy's Brain. He'll survive.

We also have a sub-branch: when friends from Nottingham came over  a couple of months ago they took the idea back with them and now, complete with a couple of new recruits, read along with us and email their pithy reviews and all important marks out of 10. If anyone would like to be one of our 'distance readers' we're currently reading The Road To Wigan Pier, followed by Fannie Flagg's Can't Wait To Get to Heaven.


Any excuse to shoehorn Ringo (or a Ringo lookakikey) into my Blog
Posted by John Medd on Monday, May 21, 2012
Labels: Book Clubs, Kennedy's Brain, Magnus Mills, Paperback Writer, Ringo, The Sun Readers