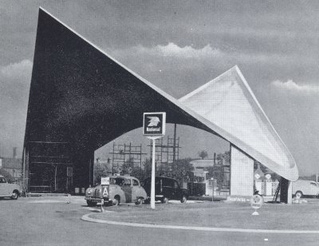 The Great North Road; just the mere mention of its name is enough to make the screen in my head go all wavy. Time was (when glove compartments were actually used to keep your gloves in), if you were travelling from London to Edinburgh, calling at all staging posts inbetween, the A1, as it later became known, was the only viable artery running through the country. If you don't count chuffers.

Long before all the roundabouts were ironed out and it became just another eight-lane stretch of blacktop, The Great North Road was one of the reasons driving used to be enjoyable. The joy of motoring was not just some mythological time dreamed up by the History Channel: getting in the car and hitting the open road really was something to be savoured. Ten mile tail backs on the M25 was a nightmare that wouldn't be unleashed on the unsuspecting British motorist for at least another 30 years. From the top of the North Circular, where signs to Hatfield and the north promised so much more than a Galleria housing a second division shopping mall built over a tunnel, to Scotch Corner and beyond - The Great North Road allowed your right foot to be just that little bit heavier than normal; except when slowing down for the traffic lights at Sandy, that is. And winding your way through market towns like Grantham and Newark.

Speaking of Newark, it was announced earlier this week that the iconic service station at Markham Moor has been granted Grade 2 Listed status. This concrete structure built in 1961 with its hyperbolic paraboloid shell roof (not unlike a smaller version of Sydney Opera House) was a gas station you didn't mind pulling in at. Any Doctor Whoevians will know it was once used as a backdrop for a John Pertwee episode. Or was it Tom Baker? Anyway, it's now a Little Chef. It could be worse, it could be a Subway.
Posted by John Medd on Saturday, May 12, 2012
Labels: Car Coats, Cybermen, Dr. Who, Hatfield And The North, Hyperbolic Paraboloid, Markham Moor, The Great North Road