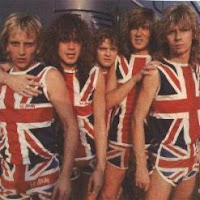 It seems to be open season on Leppards - especially the Def variety: it would appear that professional Northerner and vocalist Joe Elliott has been bemoaning the fact that rock bands get a bad press these days (no shit Joe?). And his guitarist cohort, Phil Collen, has just married the (third) girl of his dreams, in what appears to be either a very badly scripted episode of Dynasty or an out-take from Spinal Tap.

But it wasn't always thus. When Elliott and his gang formed Def Leppard at the arse end of the '70s, they had no bigger goal in their sights than playing Thin Lizzy covers and, maybe one day, getting a crack at their beloved Sheffield City Hall opening for Rory Gallagher. But, in less time than it takes to say spandex pants, they went from a self pressed EP (Getcha Rocks Off) and working men's clubs to the States and a multi-million selling album (Pyromania) that became the template for all metal albums in the '80s (and beyond).

I remember Joe living in Isleworth, west London, during the transition stage. He was sharing a house with some friends of mine, The Next Band (their drummer Frank Noon played on that EP). It was as if he was waiting for MTV to happen. And when it did, they showed the rest of the world how to use it. Uncle Sam adopted them and, not since the giddy days of The Beatles had the Americans taken to a bunch of working class English kids playing their rock'n'roll.

But it wasn't to last; the stories have become part of heavy metal folklore - car chases, severed limbs, fatal overdoses. Nobody from the School of Hard Knocks comes banging on their door for overdue subs.

However, some 30 years later, they're still doing what they do best: filling stadiums the world over and, yes, rambling on about how much better rock was in their day.
But cut the lads some slack. They don't mean any harm. They're metallers (albeit with a soft centre these days). If you want an edgy rock and roll quote, then go and stick a microphone under Damon Albarn's nose. Or Morrissey's. But if it's plain talking you want, then Joe's still your man.

Instead of trawling through the Leppard catalogue, I've found this: a bunch of bluegrass fingerpickers giving Rocket a full makeover.