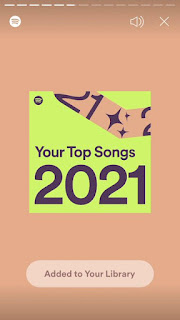 I've always held a firm belief that my records talk to each other when I'm out of the room. "Why does he play you all the time? He hasn't played me for ages; do you think he's fallen out with me?"

Far fetched? Only as far fetched as the idea I had as a kid that if all my 33s & 45s came fitted with a meter that told me how often I'd played them then I would have the raw data to go up to certain platters that were perhaps feeling a bit unloved, put my arm around them and give 'em a spin. Which is precisely what Spotify does. I know some of you probably look down on your noses at such streaming platforms in the same way I recoil whenever anyone mentions Wetherspoons, but every year I've subscribed to their service the personalised end of year roundup has been not only an antidote to my piss poor memory but also validation that good tunes will always rise to the top.

I shan't bore you with everything I've been listening to this year (the complete playlist is 100 songs long and, anyway, you'll find tons of 'em in posts passim), instead I'll just give you my Top 5. However, if your appetite is whetted, then I'm sure I can shoehorn some (or indeed all!) of the remaining 95 into a follow up post (or two) sometime in the New Year. 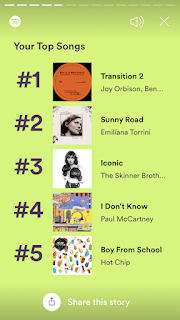 So what's at the top of the shop? Anyone not familiar with the work of Joy Orbison might want to use this track as a jumping of point. All I can tell you is that it will probably be playing at some point on my American rail holiday next year; you'll see why when you hit play...