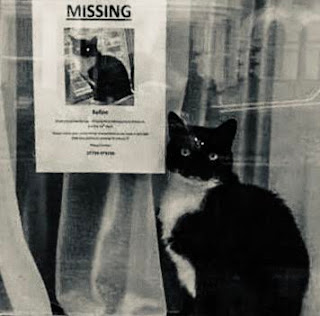 I've had better weeks; that's for sure. Though, truth be told, testing positive for Covid on Monday didn't really come as a major surprise. I just think I've been riding my luck for the last 18 months; we all have.

And has it put a crimp in my life? Hell, yeah. Just in the immediate term I had to cancel my blood donor session last night, get a refund on my Leeds Beer Festival tix this weekend and then put a call thru to friends cancelling our visit to Scotland next week. But, you know what? It doesn't matter. Really, it doesn't matter; in the grand scheme of things. I'm still the right side of the grass - and for that I'm eternally grateful.

A couple of things that I'd like to share with you as I sit here self isolating. The first of which I'm sure a lot of you can relate to. We've all seen those 'Lost' and 'Missing' flyers stuck on telegraph poles. Cats and dogs. Sometimes hamsters. But nearly always cats. Sherwood in Nottingham - where I live - is certainly no exception. But what happens if and when they're found? And how do we know? The owners often take the posters down, but that doesn't definitively tell us that Tiddles has turned up after 48 hours spent under next door's spare bed. But last week there was lovely bit of footage I saw of an owner taking down her Lost poster whilst carrying the recently found feline under her arm. The perfect story arc. Frustratingly, I can't find the film for the life of me; instead I'm posting a rather quaint photograph (above) I think is self explanatory. Or is it?

KEXP Radio in Seattle have been knocking it out of the park for well over 20 years; their live sessions have gained legendary status with featured acts, from both sides of the Atlantic, using their appearance as major bragging rights. And Vanishing Twin are no exception. If you ever find yourself having to self isolate, stick the kettle on and give their sesh a spin. Until such time, however, here's a quick fix: this is their latest single: