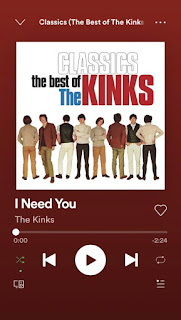 On the back of something my friend The Swede posted the other day, I've been making a playlist of records lasting precisely two minutes twenty two seconds; it's called The 222 Club and is taking shape nicely - early inductees include T. Rex (Solid Gold Easy Action), Booker T & the MGs (Soul Limbo) and The Damned (Love Song). It's filling up fast, so I'll hopefully be putting it out there this side of Christmas.

You can file the next bit under 'Stop me if you've heard this before' (I've been writing this blog for over 10 years and can't for the life of me remember if I've shared this with you already or not). Fifteen years ago - whilst James was still living at home - we recorded a demo in his loft bedroom-cum-recording studio. We decided on an old Kinks song, I Need You, but gave it a much heavier feel.  Although we were both pleased with it at the time, it would be another 10 years till we recorded anything together again.  The reason for bringing this up (again?) is that I considered the Kinks for the 222, but was dismayed to learn it clocked in at a laborious 2:24; when James and I were set loose on it we were able to shave a full 22 seconds off that!

Posted by John Medd on Saturday, December 12, 2020
Labels: I Need You, James Medd, The Kinks