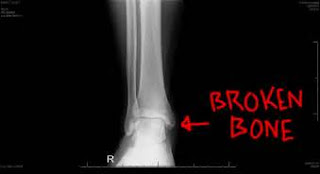 I should've known better. I may have finished with Pickering, but, Pickering, quite clearly, wasn't finished with me; one final twist in its tail. An afternoon and evening of goodbyes in the town and a walk back up the hill for the last time.
Why I never saw the dodgy paving slab is still puzzling me. Yes, drink had been taken. But, in my defence, how was I to know that one step would have such consequences? What appeared at the time to be a very bad sprain was actually a break. This is what the result of my X-Ray showed (taken in Nottingham a week later when I was concerned that the swelling still hadn't subsided):

'There is a displaced transverse fracture of the top of the right distal fibula with associated soft tissue swelling of the lateral malleolus and anterior joint effusion. Fracture clinic referral advised.'

Long story short, my fear of being 'in pot' for weeks on end was, thankfully, unfounded. My consultant at the hospital told me that that wouldn't be necessary. A sturdy Chelsea Boot (my footwear of choice) should do the trick and as long as I don't attempt running a marathon anytime soon, the fracture would, in four to five weeks, mend by itself. I'm being over simplistic, of course, but worries about not being able to drive and hobbling around on crutches were dispelled. So, lots of rest then; easier said than done when you chuck my recent house move into the mix. These 80 boxes won't, apparently, unpack themselves.
But at least I can reduce the amount of walking (and driving) around in the next few days/weeks because... 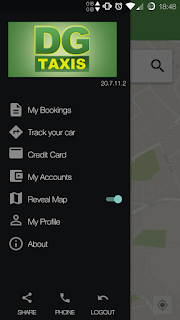 Living back in a city means that I don't have to rely on the car as a sole means of travel - we have public transport (where I've just moved from there was the daily stagecoach that would come through our town and pick up the local snake oil salesmen who would would then head south to the nearest market).

We now have regular buses (every four minutes). And trams (buses on rails). And trains (that will take you anywhere in the country. Even London). And, obviously, taxis.

When we moved, the first App I downloaded to my phone was a local taxi firm who appear to have nicked Uber's booking and tracking system lock stock and barrel (and none the worse for that). Getting around town has never been so easy. I know when my Hackney carriage is coming (I can see precisely where he/she is at any time), the name of my driver and even the registration of the pick-up vehicle. Many of you reading this will be thinking that I must have landed from some distant planet - well, you're not far wrong - I have come from the past. So I guess that makes me a time traveler. And it feels [expletive] great.
Posted by John Medd on Saturday, June 10, 2017
Labels: DG Taxis, Nottingham, QMC