With your long blonde hair and your eyes of blue 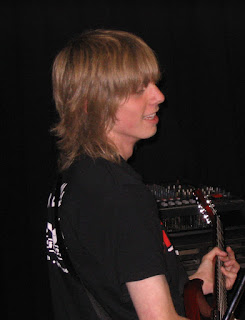 It's always the way: I'm looking for a photograph of me wearing a particular shirt I once owned (long story) and I end up with (as it turns out) a much better photo of the Number One Son rehearsing with his band, Trippin' Over Wah. The image (above) captures him perfectly. It was taken in 2005. In 2005 James was famous. Seriously. 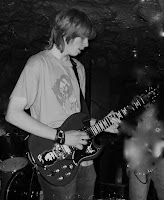 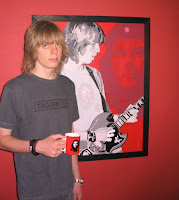 * Did I mention that Phill did his whole breakfast show from our house in July of that year?

* James was a Rock Star in Japan. His tee shirt said so.

* Trippin' over Wah were regulars at Nottingham's Boat Club - that reminds me, James once helped me do some research on one of the UK's most illustrious music venues for a future blog post I really must get round to writing.

* The police were regularly called out to their gigs.

* He was fighting off the babes with a shitty stick.