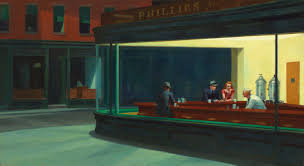 What makes a painting a great painting? I guess it all comes down to personal taste; just because Sotheby's (other auction houses are available) have catalogues full of canvases with asking prices north of what you'd pay for a Lear jet, or even a small island in the Bahamas, doesn't make them great. With maybe a one or two exceptions.

Back in 2006 I cut loose on a family vacation in New York, left Jenny and James back at the apartment devouring waffles and American TV, and spent a morning at the Metropolitan. Therein I lost all track of time and just immersed myself in ART! In a museum bigger than the town I currently live in, I wandered through vast halls in what I can only describe as a heightened state. And then, maybe an hour in, I found what I was looking for. A visiting Edward Hopper exhibition was in town, and they'd brought the big one: despite having practically grown up with Nighthawks - on posters, prints and postcards - nothing prepares you for the sheer size of the thing as you approach it from the far end of the room.

The painting measures 60" x 33 1/8 " and hits you like a sledgehammer. It did me, anyway. I stood, just a couple of feet from it for a good thirty minutes. My eyes took in every square inch of canvas as I tried to memorise it. I wanted to shut my eyes and still see it. It worked. And it still works - as a mindfulness exercise, I can recommend it.

Hopper, who painted his masterpiece in 1942, was very vague about the inspiration behind the diner and where, and, indeed, if it existed. The clever money is on a little place in Greenwich Village that was later torn down, but nobody really knows. This picture (left) claims to be it, but isn't. 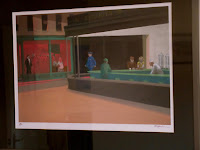 As with most great paintings it's been parodied more times than Downfall. Yet, as with most forms of imitation, a lot of them are very flattering. My favourites are the pixellated version, Star Trek and the one that hangs in Medd Towers - try and spot the game it's depicting. The fact that the diner is called Chalkies may give it away.