I was too blind to see 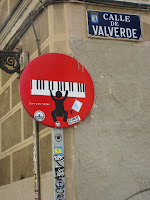 Carl Hetherington has presided over all my recordings since 2012. Pickering Place and Chip Off The Old Block were both recorded at the congenial Oakwood Studios - on the outskirts of York - with Carl at the helm. Not only is he a fabulous producer (his knob-twiddling skills are legendary in this part of the world) but also a fine piano player. We recorded three songs just before I went to Madrid – Hey Hey Hey, Days Like This and Fool. Fool is one of the saddest songs I’ve ever written. And that’s saying something, by the way. I asked Carl to tinkle the ivories on this one and in so doing I think we’ve succeeded in really swathing it in melancholia.