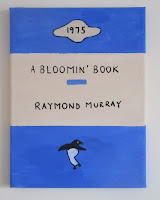 When my cousin Raymond Murray was asked way back in 1975 by John K**** (our tearaway, black sheep of a cousin) who his favourite cousin was, he told him. And he told him straight: 'Adrianne'.

K**** was crestfallen: 'Adri-fackin'-anne? She's a fackin' girl.' Indeed she is. I, however, was never asked this question as a boy. If I had, I would have said Raymond. Though Adrianne would certainly have been on the podium too. Anyway, it's all immaterial now. I'm in my fifties and love Raymond, Suzie and Adrianne in equal measure. I probably told them as much last weekend. As for K****, he was a wrong 'un. He fell off the radar many moons ago and these days will either be inside or underground.

In 1975, Raymond kept a book. And in this book he transcribed every Top 40 singles chart rundown as broadcast by Johnnie Walker on Radio 1. This would have been on a Tuesday lunchtime when chart positions were everything and Radio 1 was still broadcasting on 247 meters on the medium wave. 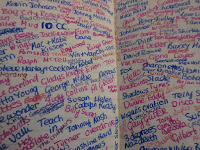 I saw this book for only the second time last weekend and it was spellbinding. The level of detail that has gone into it is quite staggering. There's even a (very early) cloud showing every group, every artist, every novelty act who made the chart between 1 January & 31 December. It is indeed an historical document.

Or, depending on your standpoint, just a bloomin' book.