Birmingham has never been pretty. In the late sixties they were pulling down their slums and erecting shiny new skyscrapers. And it wasn't just Birmingham, it was happening in every other major city in the UK. But no matter how hard you tried to polish it, Birmingham never sparkled. 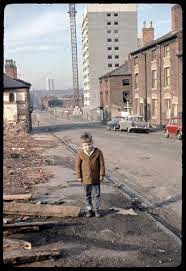 There was a cross over period when they hadn't quite finished knocking down the old and they hadn't yet finished building the new. John Bonham would have been able to tell you all about it if he was still with us: in 1968 when Wimpey built Butterfield Court in Dudley, he was one of the first to move in.
In fact a lot of Led Zeppelin fans think it was the drummer's tower block that appears on the inside sleeve of Led Zep 4. It is in fact Salisbury Tower in the Ladywood district of Birmingham; both equally ugly. They've knocked a lot of these eye sores down now. People, it would appear, given the choice, prefer not to live up in the air.