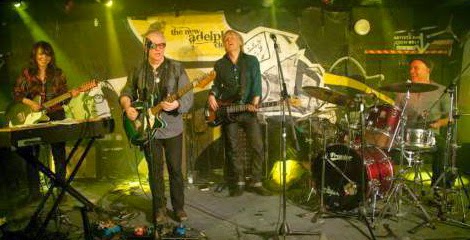 It's that time of year: everywhere you turn you get beam-ended by yet another 2014 round up or, worse still, a bucket list.  Don't get me wrong, I like a list as well as the next man - in my previous life as a music journalist, the run up to the end of the year was all about rating and ranking one album or film or gig above another. And plenty of my fellow bloggers you see in the right hand margin of my ramblings are filling their boots also. It's a good way of compartmentalising the past; 'tidy up time' as a very annoying Antipodean BBC radio presenter working in the West Midlands used to say.

These days I tend to latch onto stuff much later. If you want to know what my favourite film of 2014 was, ask me in about 2018 - there's every chance I might have seen it by then. But if you really must know what's been floating my boat this year and don't fancy trawling through the 100+ blog posts I've written this year, here's my rough and ready reckoner:

I'm tempted to say Dodgy at York Fibbers. Not least because I supported them that night. I'd also love to report that violin virtuoso Nigel Kennedy (who shared my birthday earlier this week) headlining this year's Scarborough Jazz Festival made it to the top; he very nearly did, but not quite. That accolade goes to Wreckless Eric. Eric, complete with a full band for the first time in years, all but lifted the roof at The New Adelphi in Hull. When he played the ubiquitous Whole Wide World - the signature tune he wrote whilst living in the Humber Delta - you could have been forgiven for thinking that you were in the presence of rock and roll royalty.

I've read an awful lot of fiction this year but my favourite read has been Going to Sea in a Sieve by Danny Baker. Danny's a writer and it shows. I now that sounds completely bleedin' obvious, but so many memoirs are penned by ghost writers or, worse, read like an eleven year old's diary (Pete Townshend springs to mind). Every line has been thought through, every gag seems effortless and, like a stick of seaside rock, it's got honesty written through it from start to finish. His David Essex story alone is worth the price tag.

After watching The Detectorists on the BBC earlier in  the year I was blown away by the theme tune and the incidental music written and performed by Johnny Flynn. Country Mile, his latest CD, arrived on my birthday and, even though it's still in its shrink wrap, I just know it's going to be my album of the year.

Without shadow, I've not heard a better 45 all year than My Type by Saint Motel. I was digging it in August and I'm still digging it now.

As much as I would love to give it to Rhod Gilbert for his BBC Radio Wales Saturday morning radio show, I'm going out on a limb here and nominating Serial. And I've only heard two episodes. A young girl goes missing in Baltimore in 1999 and week by week the story is stood up on its end, pulled apart and dissected. Gripping stuff.

So there you have it; well, very nearly. After spending the first half of this year working away from home I was going to list my best B&B, pub, restaurant for diners who dine a la todd, Open Mic Night etc. but thought that was maybe going a bit too far - though honorary mentions must go to Brodies in Chalfont St Peter, The Shoulder of Mutton in Wantage, The Wheatsheaf in East Hendred and The Catweazle Club in Oxford.
Posted by John Medd on Tuesday, December 30, 2014
Labels: Danny Baker, Hull, Humber Delta, Johnny Flynn, Saint Motel, Serial, Wreckless Eric