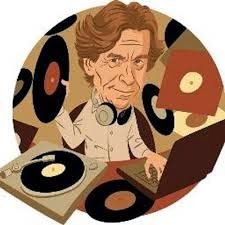 I've been reading David Hepworth's blog 'What's He On About Now?' for as long as I can remember. In fact if it wasn't for him and the irrepressible Mondo, 'Even Monkeys Fall Out Of Trees' probably wouldn't have got off the ground. Last year David and I both both appeared in Saga magazine's Top 50 over-50 Blogs; not quite the Man Booker Prize, but I was chuffed all the same.

David's CV, however, extends way beyond blogging. Broadcaster, journalist, publishing industry analyst, he's been spinning around  in my orbit ever since he co-hosted The Whistle Test with Mark Ellen in the 80s and continues to do so through his writing and podcasts. He is also soon to be a published author.

David kindly agreed to answer a few probing questions for this humble blog.

You're obviously passionate about print journalism, but where is the next generation of great writers going to come from?

I'm not sure I am passionate about print journalism. I read and value some of it but my children's generation don't, and they're the ones who will decide its future. There's lots of good writing all over the place, some of it long and some of it short; there's more of it than ever before. The difference is people have great difficulty getting paid for it. I don't know what the answer is. If I did I'd be a billionaire.

I understand you're writing a book about 1971. What, for you, sets that year apart from any other?

If you hadn't have been hosting Live Aid would you have gone to Wembley for the day?

Frankly, probably not. Those were our years for raising small children and Saturdays were spent ferrying them between swimming lessons and parties. And since I never watch music on TV I would probably have missed it altogether.

Can anything replace the 45 rpm single?

For all sorts of reasons, no. Pop flourished amid scarcity and now it's just another thing which we have an over supply of. That's not to say people don't still like music. It's just that they can never feel what I felt for Good Vibrations because nobody can imagine the background against which it appeared. Two TV channels. One radio station playing no more than ten discs a day.

Is Amazon the new HMV on Oxford Street?

Well, it's bigger, better stocked and a lot more sinister. The thing that shops like HMV offered was an education. You spent hours in the place - in my case, since I worked there, years - and you absorbed a huge amount that it's impossible to absorb nowadays. That's the problem with on-line retailing. Vast choice which you can only glimpse through a tiny window.

Is London getting too big for its boots?

The great thing about London is its complete indifference to what anybody thinks of it. We're really not bothered because we live in London and we wouldn't want to be anywhere else. Once a year Hartlepool supporters descend on the capital dressed as Smurfs or penguins or whatever. This in my experience is the only thing from outside London that impresses Londoners.

Who was the last band you paid to go and see? And were they as good as the first band you went to see?

I honestly can't remember. But since the first act I went to see was Chuck Berry I think it's safe to say that they weren't.

What a bummer, you've just had two dinner party invites land on your doormat for next Saturday night. One from Paul McCartney, the other from Ray Davies. Who do you let down politely?

I suppose I'd go to Macca's because he's living history and my wife would be tickled to meet him. Mind you, vegetarian food is a bit of a drawback. Seriously, I've met lots of famous rock stars and the overwhelming majority of them are only comfortable talking about themselves which makes them not brilliant at socialising.  If I could choose one to socialise with it would be Randy Newman, who's just interested in people and funny about them. He's had me weeping with laughter.

Can you ever read for pure enjoyment or are you always framing a 500 word review whilst turning the pages?

I am *always* reading for pure enjoyment. There is nothing I would rather do. I find it very difficult to read out of duty.  I'm never framing 500 word reviews because they're really hard work. I prefer to write something on my blog because as soon as I'm bored I stop.

It's common knowledge that Penny Lane is the The Beatles' finest hour. But what other two tracks would it share the podium with?