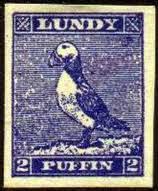 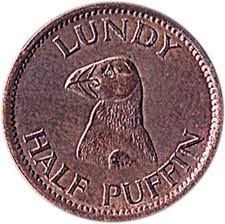 It's a actually a tiny island in the Bristol Channel. With a population of only 28 you'd just about be able to man up two teams for a game of footie, with a ref, two linesmen, a fourth official and one man and a dog to watch. And don't forget the puffins: the literal translation of Lundy is Puffin Island. As commemorated by their coins and stamps. At the turn of the millennium the island's once enormous puffin population had been thinned down to just two breeding pairs. Now, thanks to island warden Phil Friend, who helped oversee the removal of the brown rat population from Lundy, that number has increased ten fold in ten years. Phil couldn't be happier - 'When I first came here you'd be lucky to see a single Puffin. Now they're everywhere.' His glamorous assistant, Jane, however, is not so sure - 'I don't know where they all come from. You turn your back for a minute and another one appears. It was never like this when we lived in Leeds.'
Posted by John Medd on Saturday, July 26, 2014
Labels: Jane Friend, Leeds, Lundy, Phil Friend, Puffins