York Fibbers may only be a tiny northern club on the indie circuit, but on Friday night, opening for Dodgy, it was my Wembley, o2 Arena and Hammersmith Apollo all rolled up into one. My previous five gigs (and the five before that and the five before that) have all been in various pubs and folk clubs playing open mic and singers nights. I usually play sitting down and there's invariably somebody on a nearby stool singing a 62 verse sea shanty with his finger in his ear. And there'll be a raffle in the interval. Sometimes I'm spoiled and a plate of sandwiches comes out; you'd be surprised at 10 o'clock, after four pints of Leeds Best, how well egg and mayo between two slices of bread goes down. 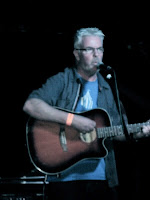 Fibbers, on the other hand, don't do raffles. Or sea shanties. But they do have a rather good sound man and a PA that meant I could probably be heard in Leeds. And though I didn't have a rider I think they're more used to M&Ms than egg and mayo; that said, I doubt Dodgy typed up their requests, strange or otherwise, on 53 typed sheets of A4.

Anyway, armed with nothing more than my guitar I walked on the stage, adjusted my microphone and plugged the guitar in. I was out of the traps. With the spots trained on me like a gun turret searchlight I had no idea where anybody was and could just about make out the bar at the back of the room. 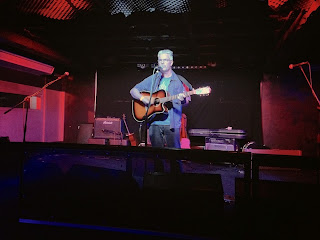 I played a greatest hits set - opening with Camberwick Green and finishing with Leeds1972. It went well. Even though I say so myself. Straight to the bar and a catch up with my glee club before three proper musicians took to the stage: I've been hanging on to Dodgy's coat tails for over 20 years and they just get better and better. I must thank Nigel, Matthew and Andy, again, for having me on the bill. Three nicer fellas you couldn't wish to meet.