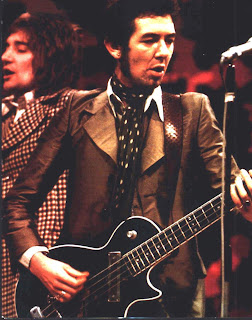 Despite it being nearly 13 years since Ronnie Lane’s sad death, the small but perfectly formed singer, songwriter and bass player, ‘Plonk’ to his mates, is still everyone’s favourite East Ender.

Along with fellow founder member Steve Marriott, Lane had experienced stardom with iconic 60s mod outfit The Small Faces before pressing repeat and doing it all over again, bigger, better and globally, with The Faces. But in May 1973 Ronnie realised that he and the rest of the band were turning into nothing more than Rod Stewart’s backing group. And that was never part of the game plan.

So, with a clutch of songs under his arm he jumped ship and formed his own band, Slim Chance. The original eight-piece line-up at that time included Benny Gallagher and Graham Lyle aka Gallagher and Lyle, two Scotsmen who helped create the folky, almost jug band, sound Lane was after at the time. The first single, How Come, produced by Glyn Johns, became an unexpected hit and a brief UK tour followed. The recording of their first album, Anymore For Anymore, took place in Ronnie’s barn in Fishpool, Monmouthshire using his newly acquired mobile studio; he and his wife Kate had left the glamorous trappings of London behind (Ronnie told the NME he’d loved looning around in the limousines, but it was only a game) and moved to a sprawling 100-acre farm in Wales; guests and visitors knew they’d arrived when they saw one of his gold discs nailed to the door. Here Ronnie would dovetail writing for and playing with his newfound rock and folk combo together with being a sheep farmer.

The album was released in June 1974 but despite being hailed as a minor classic barely troubled the charts; which was a crying shame as masterpieces like (Bye and Bye) Gonna SeeThe King and Roll On Babe sounded like they’d been in your psyche forever. Likewise its sister single The Poacher only scraped in at No.36 despite plenty of radio airplay. However, it was the subsequent tour that Lane and Co. took on the road that people still talk about today. The Passing Show was no ordinary rock and roll tour: By this time Ronnie had embraced the gypsy life style (even down to living in a converted bus) and thought he’d found the perfect outlet to combine the music and his new Romany guise. Taking his band and a virtual circus troupe comprising fire-eaters, jugglers and burlesque dancers the plan was to pitch up, quite literally, in towns up and down the country in a huge big top. But he’d overstretched himself and despite his ambitious hopes, some might say naivety, it was to be his financial undoing. The tour soon hit the buffers and Lane went broke.

It was the second incarnation of Slim Chance that regrouped after this debacle (Gallagher and Lyle had left on the eve of the tour); Steve Bingham was now on bass, Ken Slaven on fiddle with Jimmy Jewell and Bill Livesey still on sax and keyboards respectively. Signing up to Island Records, Lane recorded the second album just simply titled Ronnie Lane’s Slim Chance. A third album, and line-up now including Charlie Hart on piano and multi-instrumentalist Ruan O’Lochlann made the exciting One For The Road, but, with no promotion, it floundered leaving the band to wither on the vine.

In 1976 Lane tried to get The Small Faces back together but pulled out after two rehearsals; though the project carried on without him from 1976-78, his part taken by Ricky Wills, Lane opted instead to record the soundtrack to the Alexis Kanner cult movie, Mahoney’s Last Stand, with former Face Ronnie Wood.

Now penniless, Lane tapped his old mate Pete Townshend up for a loan; he and Lane had recorded three albums privately in the early 70s dedicated to the teachings of Meher Baba- the best of which Townshend included on his 1972 Who Came First album. But Townshend said no. Lane then asked if he’d write a few songs for him and produce his next record. Townshend again said no. But what Townshend did agree to was to play with Ronnie and put out a joint record: Rough Mix was to be Lane’s get out of jail card. Townshend insisted that they brought in legendary producer Glynn Johns who Townshend trusted implicitly (you’ve only got to hear Who’s Next to see why). It began with the two working hard on songs that each of them had brought into London’s Olympic Studios but it soon became apparent that all was not well with Lane. Townshend famously recalls an incident when, seemingly drunk, Lane goaded him and, as Roger Daltrey will tell you, Townshend let his fists do the talking; but with just one punch Lane flew through the air like a carton character; he was showing the first signs of multiple sclerosis and, some days, had trouble just keeping his balance.

With a rigorous schedule they honed the final selection of eleven songs that included many guest musicians: Eric Clapton and Charlie Watts being just a couple of the cognoscenti who made the finished album such a delight. From Lane’s poignant Annie and Catmelody to Townshend’s urban operetta Street In The City (a prequel to The Jam’s Smithers-Jones?) the album covered many bases but at its core was sweaty rock and roll. And, despite the punks, it was critically acclaimed in early 1977 and kept the wolves from Lane’s door (for a while, at least).

Lane’s further musical contribution to the seventies was limited to a solo album he put out in 1979. With much of the selection co-written with Eric Clapton, See Me came out on Gem Records and from it he lifted the single Kuschty Rye which came out in January 1980.

By the early 1980s the MS had become very invasive; it was making normal life, let alone music, virtually impossible. Just one collaboration from this period exists; Lane and old friend Steve Marriott teamed up under the moniker Majik Mijjits but, due to Ronnie’s illness, the demos were only released after his death.

For anyone who is struck down with this debilitating disease it is a tragedy. Not just for the patient but friends and family. When Ronnie’s friends were aware of the progressiveness of his condition they joined forces and in 1983 booked The Royal Albert Hall for two nights and staged the ARMS [Action for Research into Multiple Sclerosis] gigs. Lane, by now in a wheelchair, managed to join Eric Clapton, Jeff Beck, Jimmy Page, Steve Winwood, Kenney Jones, Bill Wyman and Andy Fairweather-Low on stage for an emotional version of Goodnight Irene.

In 1984 Lane moved to the States; where not only could he benefit from warmer climes but where more was known about MS (here Ronnie benefited from the use of a hyperbaric oxygen treatment). He took up residence in Texas, first in Houston and later Austin, where he formed an American [version of] Slim Chance-never the same line-up two gigs on the trot but always giving value for money.

One date all Faces’ fans will have etched into their memories is 5 July 1986: Rod Stewart played Wembley Stadium and was joined for the encore by the original Faces line-up. Ronnie sang in his wheelchair but was not well enough to play bass; Bill Wyman stepped in.

In 1987 Ronnie met Susan Gallegos and they married at a private ceremony in Austin the following year. Susan became not only his wife but also his private full-time nurse. Ronnie still played as and when his health allowed, even managing a mini tour of Japan in 1990.

During his tenure in Austin he was seen as a living legend and everyone wanted to work with him. Live In Austin brings together highlights of Ronnie’s thirteen live radio shows recorded in the town with a merry-go-round of musicians including Alejandro Escovedo, Ronnie Johnson and Darren Hess.

In 1992 Ronnie got up on a stage for the last time: Ron Wood was playing at The Opera House in Austin with a band featuring Ian ‘Mac’ McLagan on keyboards. Plonk joined them for the encore and sang Ooh La La. Many years later Rod Stewart would take his old friend’s song and take it into the charts with, unlikely bedfellows, The Corrs.

Ronnie and Susan moved to Trinidad, a small town in Colorado’s Rocky Mountains in 1994. His medical care was now being financed by way of donations from Rod Stewart, Kenney Jones and Ian McLagan. Small Faces royalties would have been all but non-existent were it not for the tireless interventions being made on Ronnie’s behalf by Mac and Kenney.

A fighter to the end, Ronnie Lane died of pneumonia on 4 June 1997.Tributes from rock’s hierarchy poured in and in Plaistow, east London, they named a street after him: Ronnie Lane.