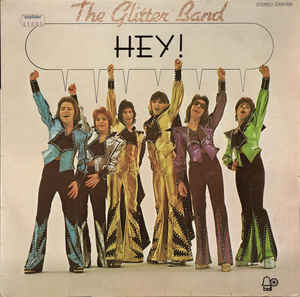 One of the defining sounds of glam rock - that jungle like double drum kit beat underpinning an onslaught of distorted guitars and horns - can trace its lineage back to a musical genre poles apart from mirrored top hats and platform boots; something, in fact, very Irish. Showbands - large ensembles of musicians that would specialise in covering cheesy hits of the day and perform them in dance halls up and down the land.

Borne out of the Mike Leander Showband in the mid-1960s their trombone player & musical arranger John Rossall peeled off to become the Boston Showband. The Bostons who were neither from North America, or indeed Ireland, decamped to Germany in the mid 60s to ply their trade and toured with every man and his dog including Jimi Hendrix and James Brown. During this period they did their ubiquitous 10,000 hours and came back to a very changed UK in 1972 as one of the tightest backing bands around.

Seeing which way the musical wind was blowing (following a meeting with Mike Leander) and with a liberal smattering of bacofoil stuck to their stage jackets they soon became The Glittermen backing the newly re-badged Gary Glitter (who as Paul Gadd/Raven had sung with both Leander and the Bostons) with his brand new tub thumper Rock and Roll Parts 1 & 2 (written by Leander and Glitter).

The Glitter Band (they were only the Glittermen until 1973), like Cliff's backing band 10 years earlier, soon escaped the shadow of their Leader and starting releasing record under their own steam. And very good records they were too. Stacking up an impressive seven Top 20 hits; the first of which - Angel Face - was lifted from their debut album, Hey!, in 1974.

I love this next clip. Fast forward 15 years and things are very different. Although Glitter is still in public circulation, he's no longer the pull he once was and he and the Glitter Band are both in reduced circumstances. But this film, for all that, I think still captures very essence of glam. Yes they may well be playing in a pub and yes they're a very stripped back band by this time but, by God, this is one hell of a performance. Gerry Sheppard is channelling his inner Glitter like he was in a venue 10x the size. Enjoy.
The Glitter Band - I Didn't Know I Loved You (Till I Saw You Rock and Roll) (1989)
Gerry Sheppard (1951-2003)
Posted by John Medd on Sunday, January 24, 2021
Labels: 1974, Gary Glitter, Gerry Sheppard, John Rossall, Mike Leander, The Boston Showband, The Glitter Band