Just Remember How We Shook Shook 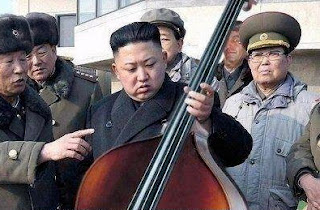 Bass players often get a bad rap; contrary to popular belief they can change a light bulb1. And some of them, I'm assured, even have girlfriends. I know, who'd've thought it?

I mention this because a track appeared on my annual Best Of CD from Chiggins which, even though my age begins with a 5, made me think2: 'God, I'd love to play the bass.'  The Look by Metronomy contains a bass line so haunting, so dreamy, so f**king catchy, I wanted to go down to the music shop, grab the nearest bass3 off the wall and run out with it yelling 'Pay you Tuesday.' I believe members of the Who used to do this on a regular bassis; never did them any harm.

And here's a (bassic) guide telling you how to play it


1 It actually only takes one bass player to change a light bulb. After the guitar player has shown him how to do it.

2 Don't get me wrong, playing bass has been on my bucket list ever since I first heard Jean Jacques Burnel playing Walk On By

3 And by 'nearest' bass, I mean Rickenbacker 4001. obvs, as played by - among others - Marin Gordon from Sparks and Radio Stars, to Wings' Paul McCartney - and a veritable Who's Who in between.


All the punk bands in the 70s seemed to favour the Rickenbacker. Everyone from Eddie and the Hot Rods to the Damned (actually that was the same fella - Paul Gray) and a whole lot more besides.  And don't get me started on Lemmy...