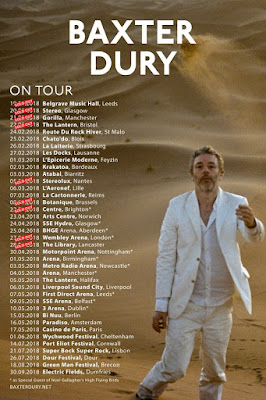 Getting to Amsterdam these days is a piece of cake (no, not that sort of cake) - easier than London, almost: thirty minutes to the airport, a short hop to Schipol followed by a ten minute train ride to Dam Square. Easy peasy lemon squeezy.

Tim and I had both been before, but for some reason we'd never landed on Dutch soil together. Until Wednesday. Our trip had been planned for a while and was essentially a jolly-up to go and see Baxter Dury. Dury is a big deal in Europe and is treated like royalty in France, apparently. We'd got tickets to see him in the world famous (it really is) Paradiso Club: when the Stones played two semi-acoustic gigs there in '95 Keith Richards said they were the best shows the band had ever played; Keef probably says this a lot, however, recordings from both nights did end up on their Stripped album later that year.

The Paradiso is a converted church building and is equally as magnificent inside and out. It's virtually in the middle of the city and barely a five minute walk from our digs. So, bearing this in mind, coupled with the fact that we bought our tickets three months ago and bearing in mind also the fact that we'd been in town since lunchtime, there could be no excuse for rocking up late to this gig of all gigs. And you'd be right - no excuse whatsoever. Erm. Well, it's like this. Hang on a minute, I don't have to explain this to you.

Suffice it to say we only missed a couple of his early numbers - I blame strong liquor and pretty girls on bikes - and the set he turned in was immaculate. Baxter is a consummate front man. Like his old man before him, you can't take your eyes off the fella (well, maybe just for a second or two - to enjoy his rather lovely keyboard players standing either side of him).

When the show finished we could still hear music, so we padded up the stairs into the main auditorium and caught The Vamps playing to a room full (and I mean full) of teen girls screaming their bloody heads off. It was like Hard Day's Night meets Rollermania. And, yes, I know, apart from me and Tim, nobody in the room would get that reference. Not least the young kid who went down like a sack of spuds. The gig was temporarily halted, the houselights came up and the paramedics were in like Flynn (another obsolete reference, I know) administering mouth to mouth and, hey, back on with the show; our cue to leave.

A good night was had by all. I remember a lot of red lights and not much else. We emerged from our digs late the following morning for a classy breakfast in a classy joint (in a classy joint) followed by more Dutch beer, before saying goodbye to the city and a promise that we'd be back real soon.