Can you pull a few strings?


Yesterday was kind of special: I'd got tickets for Thunderbirds Are Go at Broadway Cinema including a pre-screening Q&A with the late Gerry Anderson's son, Jamie.

There's something about sitting on the front row at the pictures - if it's good enough for Jamie Anderson and Scott Tracy, then it's certainly good enough for me. Scott was very quiet all afternoon, however Jamie was more articulate; he told me afterwards it was the first time he'd ever seen the film on the big screen.


I also asked him how cool it must have been as a kid to have Gerry Anderson as your dad. "Kind of," he said, "But, between the ages of 11 and 16, never a day went by without someone at school asking me why I didn't walk like a Thunderbird puppet." A small price to pay, I'd have said. 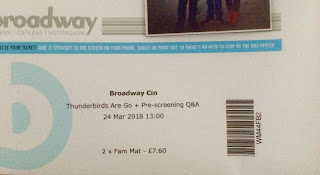