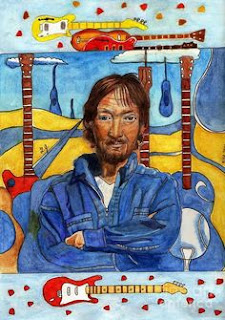 Chris Rea is, I read today, on the mend. He collapsed in Oxford at the weekend halfway through his set.

It's not the first time Rea has had to ring 999. He's not enjoyed the best of health for some time and very nearly checked out on a couple of occasions in the early noughties.

Since reinventing himself as a serious blues musician, the Middlesbrough born guitarist has found a new audience while still retaining his faithful following. It's been a while since Rea troubled the charts with infectious hits like Road to Hell, Fool if You Think it's Over and, of course, Driving Home for Christmas*, but the quality of his new material has never dipped.

*Of course I haven't chosen his Yuletide smash from 1988. No, today I'm going with On the Beach. I love what Rea did when he turned it from a diamond in the rough album track to a Top Twenty single. And the thing he did? Listen to the electric piano motif (3:37) - it only appears once, and lasts for just four seconds! When he re-recorded the song he replicated the same lick on the guitar - where it became the hook that runs through the whole record from start to finish. Genius.

For what it's worth I think I prefer the album version, but if I was listening to this on a beach I'm sure I wouldn't give a monkey's chuff. Anyway, sit back in your deckchair and enjoy them both.